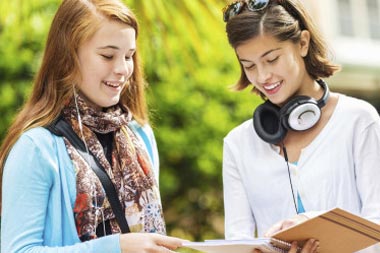 Adolescence, transitional phase of growth and development between childhood and adulthood. The World Health Organization (WHO) defines an adolescent as any person between ages 10 and 19. This age range falls within WHO’s definition of young people, which refers to individuals between ages 10 and 24. In many societies, however, adolescence is narrowly equated with puberty and the cycle of physical changes culminating in reproductive maturity. In other societies adolescence is understood in broader terms that encompass psychological, social, and moral terrain as well as the strictly physical aspects of maturation.

In these societies the term adolescence typically refers to the period between ages 12 and 20 and is roughly equivalent to the word teens. During adolescence, issues of emotional (if not physical) separation from parents arise. While this sense of separation is a necessary step in the establishment of personal values, the transition to self-sufficiency forces an array of adjustments upon many adolescents. Furthermore, teenagers seldom have clear roles of their own in society but instead occupy an ambiguous period between childhood and adulthood. These issues most often define adolescence in Western cultures, and the response to them partly determines the nature of an individual’s adult years. Also during adolescence, the individual experiences an upsurge of sexual feelings following the latent sexuality of childhood. It is during adolescence that the individual learns to control and direct sexual urges.

Some specialists find that the difficulties of adolescence have been exaggerated and that for many adolescents the process of maturation is largely peaceful and untroubled. Other specialists consider adolescence to be an intense and often stressful developmental period characterized by specific types of behavior.

Your Health is Our Top Priority with Comprehensive, Affordable medical.